S. Estrada, et al., Multistage Cretaceous magmatism in the northern coastal region of Ellesmere Island and its relation to the formation of Alpha Ridge – evidence from aeromagnetic, geochemical and geochronological data. Nor. J. Geol. 96, 2 (2016).

Before the pandemic, I participated in a field and sampling campaign to the Central Andes in Chile. Last year, our research team published a paper sharing some of our initial findings (link to paper: https://www.nature.com/articles/s41598-020-63454-1#article-info focusing on oxygen isotopes in mafic erupted products).

The Andes are breathtakingly beautiful!

My colleagues and I wrote a piece for the American Geophysical Union’ s (AGU’s) Eos magazine about Agung volcano on Bali, Indonesia. You can read it here: https://eos.org/science-updates/forensic-probe-of-balis-great-volcano

In the Eos article, we talk about how studying minerals like pyroxene and feldspar can help us to learn more about volcano-magma systems.

“Researchers have now found an explanation for what triggered the largest volcanic eruption witnessed by mankind. The volcano’s secret was revealed by geochemical clues hidden inside volcanic quartz crystals”.

-The weekly newsletter of the Geochemical Society, Jan 31st 2017

Below you can read a summary of our recently published work on Toba supervolcano, that also appeared in Swedish on Uppsala University’s website here.

The secret of a supervolcano

The deadliest volcanoes on earth are called supervolcanoes, capable of producing cataclysmic eruptions that devastate huge regions, and cause global cooling of the climate. The Indonesian supervolcano Toba had one of these eruptions about 73 000 years ago, when 2 800 cubic kilometers of volcanic ash was ejected into the atmosphere and rained down and covered enormous areas in Indonesia and India.

Scientists have long debated how these extraordinary volumes of magma are generated, and what makes this magma erupt so very explosively. A team of researchers at Uppsala University, together with international colleagues, have now found intriguing clues hidden inside millimeter-sized crystals from the volcanic ash and rock.

The researchers analysed quartz crystals from Toba, and found a distinct shift in the isotopic composition towards the outer rim of the crystals.

‘Quartz crystals that grow in the magma register chemical and thermodynamical changes in the magmatic system prior to eruption, similar to how tree rings record climate variations. When the conditions in the magma change, the crystals respond and produce distinct growth zones that record these changes. The problem is that each “tree ring”-analogue is only a few micrometers across, which is why they are extremely challenging to analyse in detail,’ says Dr. David Budd at the Department of Earth Sciences, Uppsala University.

The researchers analysed quartz crystals from Toba, and found a distinct shift in the isotopic composition towards the outer rim of the crystals. The crystal rims contain a relatively lower proportion of the heavy isotope 18O compared to the lighter 16O.

‘The low ratio of 18O to 16O contents in the crystal rims indicate that something in the magmatic system changed drastically just before the big eruption. The explanation behind these chemical signatures is that the magma melted and assimilated a large volume of a local rock that itself is characterised by a relatively low ratio of 18O to 16O. This rock type also often contains a lot of water, which may be released into the magma, producing steam, and thereby an increased gas pressure inside the magma chamber. This rapidly increased gas pressure eventually allowed the magma to rupture the overlying crust, and send thousands of cubic kilometres of magma into the atmosphere,’ explains Dr. Frances Deegan at the Department of Earth Sciences, Uppsala University.

‘Biologists have previously shown that this particular eruption at Toba pushed humanity close to extinction. It will hopefully take many thousands of years, but the fact is it is only a matter of time before the next super eruption, maybe at Toba, Yellowstone (USA), or somewhere else. Hopefully, we will know more and be better prepared next time!’ says Professor Valentin Troll at the Department of Earth Sciences, who led this study of Toba quartzes at Uppsala University.

A little while ago, I spoke with Annica Hulth from Uppsala University about volcano research in Uppsala. It was a lovely experience to take part in an interview about my research. The piece written by Annica is below.

Volcanoes both fascinate and frighten people because of the beautiful landforms they create and the powerful force of volcanic eruptions. Studies of rock, minerals, and gas erupted from volcanoes enable researchers to look into the earth’s interior and help to provide important information to people who live close to active volcanoes.

Frances Deegan is part of a research team at the Department of Earth Sciences which specialises in volcanoes. She is a geochemist and studies the interaction between magma and limestone in volcanoes in various parts of the world.

She has been, for example, to Merapi in Indonesia and Vesuvius in Italy, which are still active volcanoes in carbonate-rich areas. Some of her work is done in the laboratory where she analyses samples of solidified magma.

“Crystals that grew in magma are fascinating because they can record the history of the volcano including where magma is born, how it is transported to the surface, and what processes it undergoes on the way,” says Frances Deegan.

“I also love to replicate volcanic processes experimentally in the lab and I am interested in how gases released from volcanoes can affect earth’s atmosphere and climate.”

When carbon dioxide bubbles up

This was the subject of the most recent study, which was carried out in collaboration with Italian and Swedish researchers. The team showed experimentally what happens when carbonate-rich rocks such as limestone and marble come into contact with magma beneath volcanoes.

Small capsules containing limestone and crushed lava were put in an oven and subjected to the same intense pressure and temperature as exists underneath volcanoes.

“The results were very bubbly,” says Frances, “just like when you put a sparkling vitamin C tablet into a glass of water.”

The bubbles were CO2 which are generated when magma meets limestone and eventually comes up to the earth’s surface and then out into the atmosphere.

“This is interesting because it can help scientists to learn more about the natural carbon cycle, which is very important especially since humans are currently interacting with such cycles on earth,” says Frances Deegan.

All kinds of volcanoes studied

The research team studies all possible kinds of volcanoes in every part of the world. These might be oceanic islands such as the Canary Islands or Cape Verde, subduction zone volcanoes such as Vesuvius, active volcanoes in Iceland and Indonesia or very old extinct volcanoes such as in the Canadian High Arctic, Ireland and Great Britain. Some of the researchers also study African volcanoes, for example in Cameroon.

An article was released recently about the Icelandic volcano Holuhraun and one of the world’s most closely monitored volcanic eruptions. It was not a violent eruption but it could have gone badly if the magma had taken another route through the bedrock. The eruption started under ice but instead of going straight up – which would have led to a more explosive eruption – the magma went 45 km towards the north-east and came up to the surface at Holuhraun, just beyond the edge of the glacier.

Many live close to volcanoes

In the above case, there was nobody who lived close to the volcano. The eruption, however, did attract many tourists who came to watch. In other parts of the world, it is common to find major cities close to active volcanoes, for example, Naples and the volcano Vesuvius in Italy.

“Research on volcanoes can help the people living nearby to understand them better and hence to be better prepared for an eruption. Volcanoes are extremely hazardous and yet many people live near them – learning about how they work is therefore not only very interesting but it is also necessary,” says Frances Deegan.

The study of volcanoes is built upon international collaboration and is of great help to local researchers who, for example, can record signals from volcanoes using different measuring instruments.

“We can’t predict eruptions, but we can try to be prepared for the type of eruption that may happen. Some volcanoes are very explosive and others not so dangerous. And all volcanoes have different personalities,” says Frances Deegan.

A version of this article appeared on UU’s website here and an article about our most recent research into limestone assimilation published in the journal Scientific Reports, can be found by clicking here.

For my first post I thought I’d share a few memories from my Arctic 2015 adventure. Its coming up to a year since I undertook field work in the Canadian High Arctic with Prof. Valentin R. Troll (Uppsala University) and Dr. Jean Bédard (Geological Survey of Canada) and it was one of the most unforgettable experiences in my life.

We wrote a piece for Geology Today about our trip and why we went there: 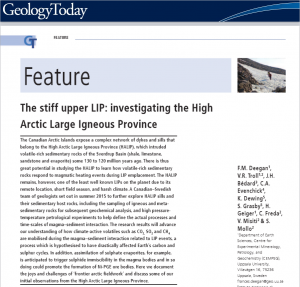 I will post some more arctic pictures again soon, but for now here is a picture of me sampling an evaporite dome:

And here is what our base camp looked like for a few days: 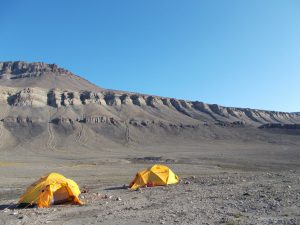 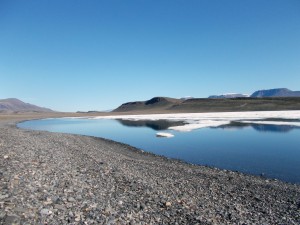 And beautiful geological features like these textures in gypsum: 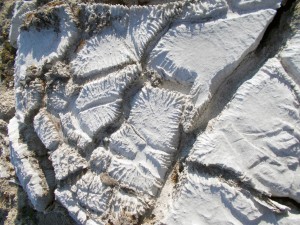 Ellesmere and Axel Heiberg Islands are beautiful places on our planet. We’ve just started our research project about magma-crust interaction in the High Arctic and links to paleo-climate. I will try to keep this site updated with future developments! 🙂

Updates about my research about geochemistry & volcanoes